I immediately put the tray of sprouts under lights. Because last year, for the first time ever, I lost all the little planties I started in January to damping-off disease. It’s something that usually only n00bs let happen. After that I planted a second round, which flew across the sunroom when I tripped on the door jamb while carrying them. A third round gave me a some plants, but not until April, which is late. I managed to get 90# of tomatoes over the whole season, which isn’t terrible.  I harvested lots of other food, like this example of a morning’s typical greenbean haul; I believe this includes Cantare, Henderson Black Valentine and McCaslin 42 varieties, all of which I recommend:

The sunroom used to be all windows, which is why it was called a sunroom, and it was terribly inefficient. Blazing hot on nice days and you could see your breath on really cold days. So Metal Pig changed the floor-to-ceiling windows to walls and installed an operable window. This didn’t let in enough light and may have contributed to the damping-off disease, but mostly I blame the commercial potting mix I bought, which I hadn’t used before.

A Pantano Romanesco from seeds I saved two years ago. I guess I somehow got two seeds stuck together. Grow, little planties! 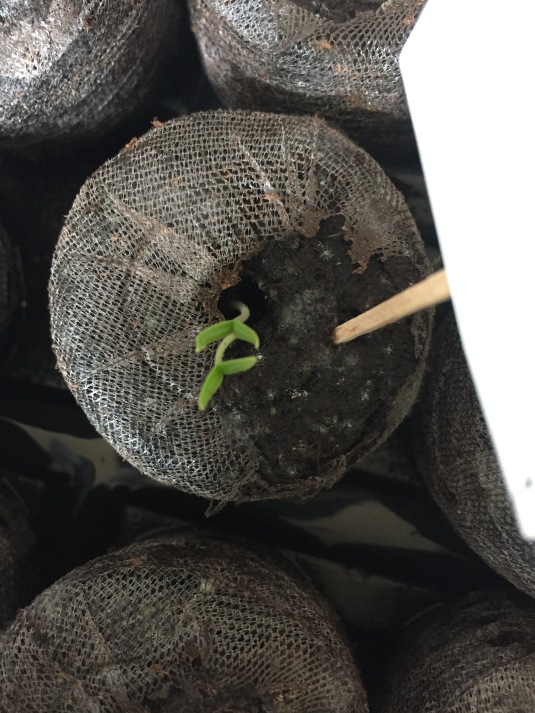 Maybe some day in August:

Today I planted 70 seeds in little Jiffy pucks puffed up with water. It’s not the first time. I’ve been growing heirloom vegetables for 12 years and I’m starting to get the hang of it. Previously I’ve put 3 seeds in each, in case they didn’t all germinate, which is Mel Bartholomew’s instructions. But he snips 2 of the 3 if they all germinate. What has happened is usually all sprout and I can’t bring myself to cull two of them. So I’d scramble to find room for them all both inside and out in the garden, like a hoarder, although I’d let a few select people adopt some. This time I put one seed in each cell. If one doesn’t sprout in a week, I’ll replace it.

Here are the varieties planted Jan. 22: 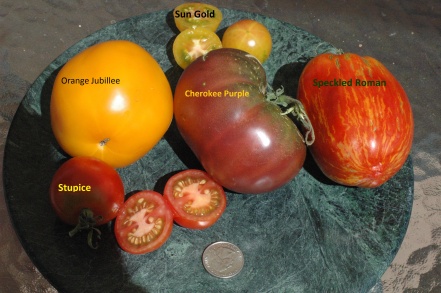 Here in Colorado, suburban agriculture can be considered kind of a luxury. The soil, without amendment and nutrients, is worthless for growing those plump, colorful vegetables you see at farmers’ markets. It can go for months without raining in the summer or snow and flood in the spring and fall. Daytime temperatures can be double the nighttime lows.

It’s possible to grow a lot of food in a small space without using an unreasonable amount of water or other resources. This year I’m tracking the expenses as accurately as I can and will calculate or estimate the return on my efforts as I pick them. I grow a lot of beans, which are eaten fresh and dried, and the ornamental-looking plants produce a lot of enjoyment and nutrition in little space. Tomatoes and other nightshades are not so easy. In the past I’ve only weighed tomatoes, a good yield for one summer being 200 pounds. You could say that’s almost a thousand bucks worth of food when you consider that these types of heirloom fruits cost $4-$5 at markets (if you can find them). But that’s only a legitimate return if you sell them or would normally buy 200 pounds of heirloom tomatoes from August to October. I make damn sure we eat, share and preserve all of them, and it’s worth it. To me. But this year I’m going to look at the actual numbers and calculate some hard, cold figures. I’m not entering time as an expense, even though time is money, because I love gardening. So it’s not billable time unless I skip work to do it.