We got about a foot of snow twice this week. I’m not sure it’s necessary to cover lettuce, radishes, beets, carrots and cilantro before a snow, but I did because it was going to be in the teens at night (Fahrenheit) so I let the snow be an insulator. Today I removed those covers, it got warm, and an avalanche from the roof slammed down on these beds, so there was no point. But I did get a cute pic.

Here they are the day before this snow.

“Rice Against”, like Wicked Garden , is a nod to one of those rock, punk or pop bands I like to reference. I guess that started since the name Deathplow was inspired by a fictional metal band a coworker made up for fun.

I don’t actually know if rice is one of the grains in the steaming mix of beer by-product I got from a local brewery today. I don’t know a lot about making beer, but brewers like Liquid Mechanics in my area are happy to donate the spent grains to farmers and gardeners. What I scooped into buckets and an old cooler was fluffy, still warm and smelled kind of nice. I’ve never used this as a soil amendment before but I did some research and it seems safe.

For starters, I dumped a load of the grains on my new experimental hugelkultur mound. Beneath that, besides snow, is a layer of cottonwood logs, sticks and bark, then upside-down turf I removed from nearby, then grass clippings and other biodegradable material including dirt from the yard. This does *not* include last year’s nightshades or squashes, as they may (and probably will) have and transmit blights or undesirable fungi. Stalky, seedy greens like orach I did include, and when they sprout in there, it’s a bonus.

I don’t want to dig and till; I’m trying to stick to the philosophy of building up, not digging down. On top of that, a bag of store bought cottonwood compost.

It doesn’t look impressive so far. But I have a pretty good feeling about this becoming a hill of beans, then a hill of greens, then a site for more complicated plants like peppers. Because last year was pretty good for my peppers, I’ve gotten more into them, with a second generation of fish peppers, anchos, and some exotic spicy ones. I joined the hot peppers subreddit.

Periodically I come across heart-shaped instances in nature, like this bit of snow that dropped from an overhead branch.

Before the snow, it was hot and sunny and I was able to dry a load of laundry including our homemade pandemic masks. One of the old shirts drying has a message for our neighbor’s kitty, Boo, who is adorable but seems to be stalking our birdy friends: 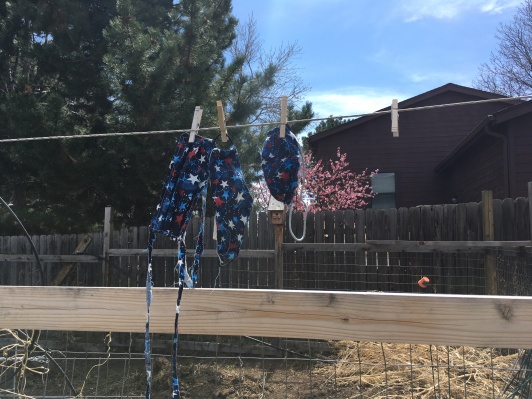 Here is our actual fish, Twerp.

He has plants in his underwater garden, too.

I didn’t put this on the spreadsheet as an expense, but I ordered a case of canned sparkling mineral water, and most of it went to the seedlings. 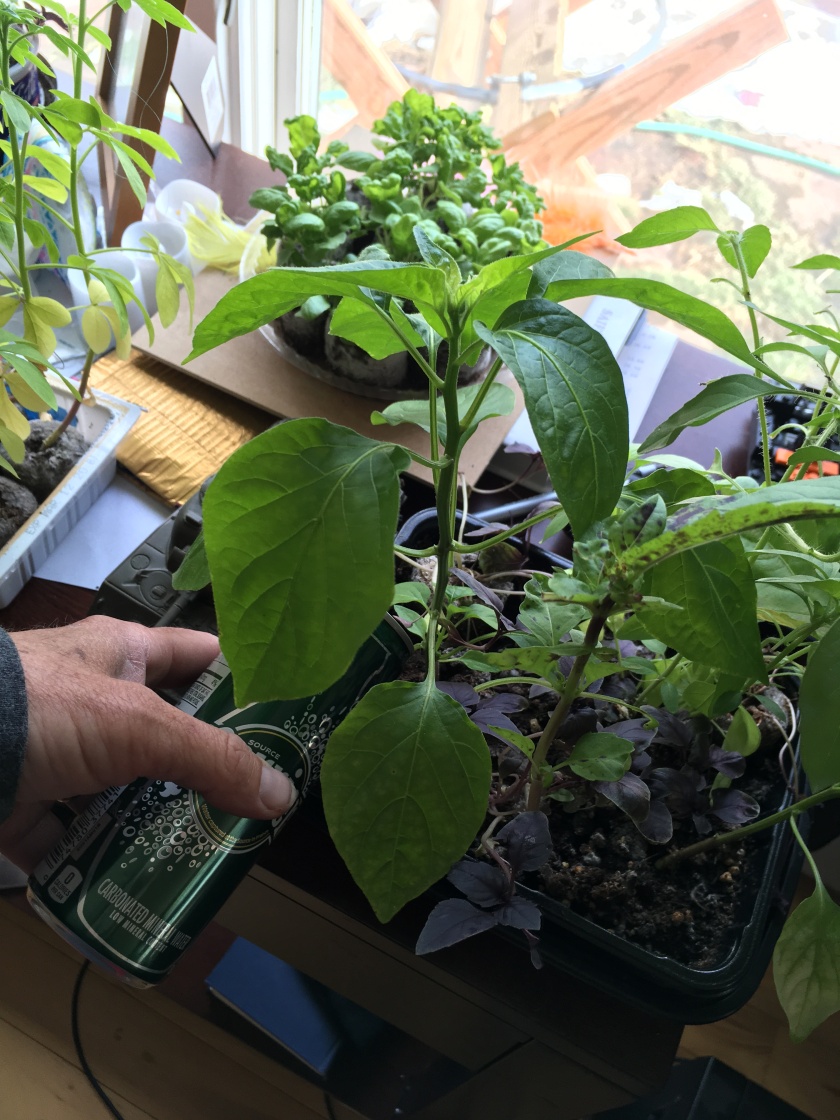