I just brought in as many beans as I could pick in a few minutes, which weighed about a half pound. I estimate I’ve picked about a pound a day for a week, and price per pound around here varies but $1.50 is reasonable. So I got a return of $10.50 this week. Kids love to eat them raw and I like them cooked Turkish style. 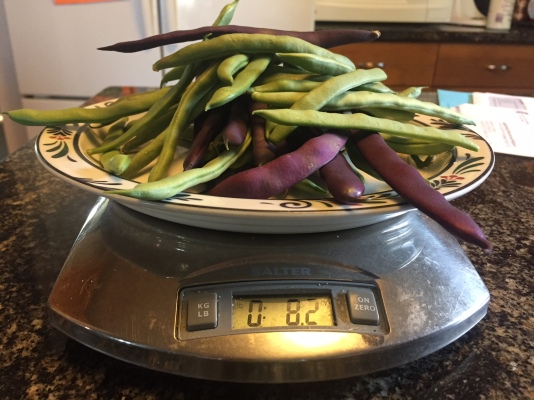 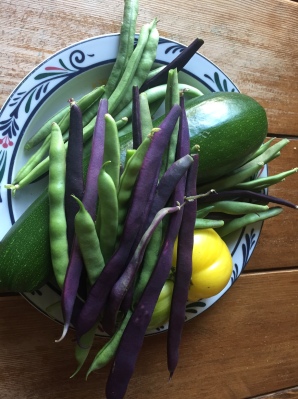 Here’s a tool to help you price your veg, if you’re a market grower or even a lemonade stand grower.

If I could grow quinoa, wheat and oats we’d save a lot of money. Quinoa is the basis for the meals the dogs and I eat, and 8-year-old EG is into baking with flour made of different grains (mostly wheat and oats). He doesn’t like quinoa, unfortunately. Like many people, we have friends who don’t eat gluten and oat flour is especially useful. Even if you do eat wheat, oats are good, cheap nutrition.

Right now I’m going back to checking on the dough for a home version of shotis puri, traditional ciabatta-like bread Metal Pig remembers from a trip to Georgia. Not the US Georgia with NASCAR and peaches, the fascinating Eurasian country of Georgia. They may have peaches as well, actually.

My plants live in beds I put together with discarded, untreated wood from my barn owner friends. They got the wood from an area company that produces wind energy and transports the fan blades by setting them in giant wooden cradle-like things on flatbeds. My friend got the cradles for free, and has about an acre of them. He has used some of the wood to build shelters for turned-out horses and said I was welcome to any of it.

So I’ve screwed together boards to create 4×4 and 4×3 boxes. They look like planting beds, but they mostly just define the space plants live in. Unlike a raised bed with weed barrier, these beds combine 6-8″ of native dirt below the surface with vermiculate, compost and other amendments.

For supporting plants with heavy fruit and giving beans something to climb, I bought cattle panels from the local ranch store. They are heavy-gauge wire panels that are 16’x4′. At the store they cut them into 8’x4′ for me. Then, using leverage and all my bodyweight, I bend them into arches. Originally I forced them into the 4×4 boxes, where they’re held firm by the wood; this requires not skimping on screws. This works, though they are more or less permanent structures. 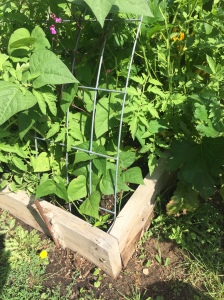 I didn’t build the cages for all the boxes last year, so I continued the project this summer. The cost was about $60 for 5 panels (they gave me one free because it was slightly bent). This time, I decided to make them more easily moved from one place to another, because I rotate crops. Again using leverage and bodyweight, which was at least 5# heavier than before since my recent vacation, I bent the panels and temporarily secured them by tying the ends together with baling twine. Then I asked Metal Pig to buy something more substantial since he was going to the hardware store and he came back with lightweight chains. They’re perfect. I cut them to desired lengths and cut only half the links on the ends to make them hooks. Then I simply hooked them to the ends of the panels on each side and cut the twine. Again they are held together by tension, but I can pick them up and move them without releasing it. This example is an 8′ panel held together with a 3′ chain on each end: 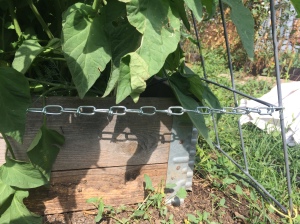 These plants have grown up through the openings in the panel and are comfortably supported. 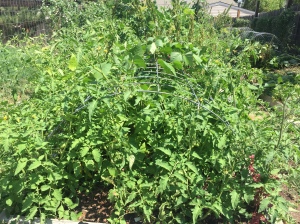