Technically, it’s still summer for a few more days. I hate letting it go and try to hoard the sunlight as the days get shorter. I stopped wearing my Tilley hat and let my normally dark hair get as sun-bleached as possible, hoping for a surfer look. My birthday is in the fall, which makes it even harder because I’m reminded of getting older, a fact I deny all summer long. But once I let it go and talk myself into looking forward to more harvests I appreciate fall. It’s like summer, with shorter days and fruit instead of flowers. Like summer got older and wiser, but stayed somewhat pretty and fertile.

Dried beans start piling up. I like the way they feel; it’s some kind of tactile stimulation. 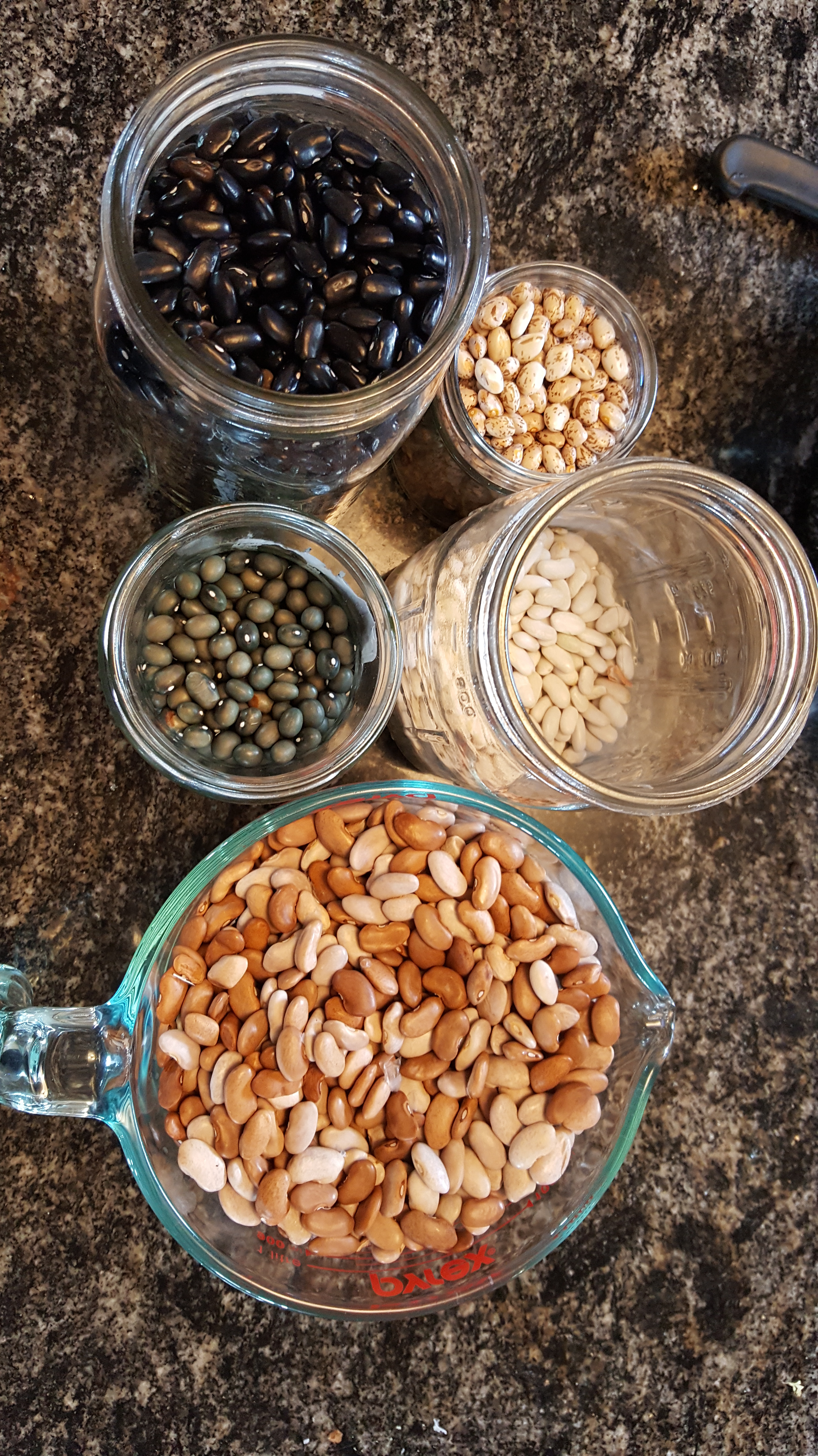 They don’t require any prep or refrigeration, just stay in jars until whenever we want to cook them.

I cooked down and canned tomatoes in a pressure canner, separated by color. Some are orange and yellow, which get a little darker when cooked, and some are red and purple, which just turn into a basic red sauce. In the past I’ve just frozen them all but I think I like canning them now. I also canned some raw and they look so watery after processing I’m not sure I did it right. There’s a food blogger I’m a fan of who would probably never make the amateur error of allowing her reflection on the shiny jars (her site is Cooking without limits). But maybe I could insert Easter eggs that way, like by having someone take pics in the nude. 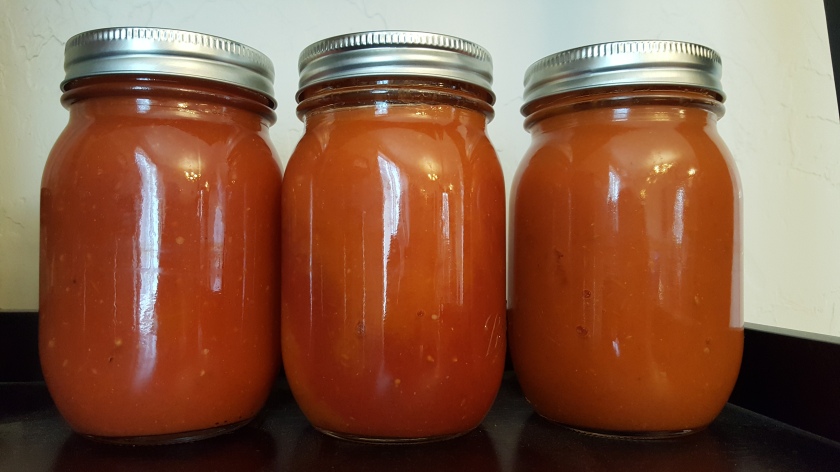 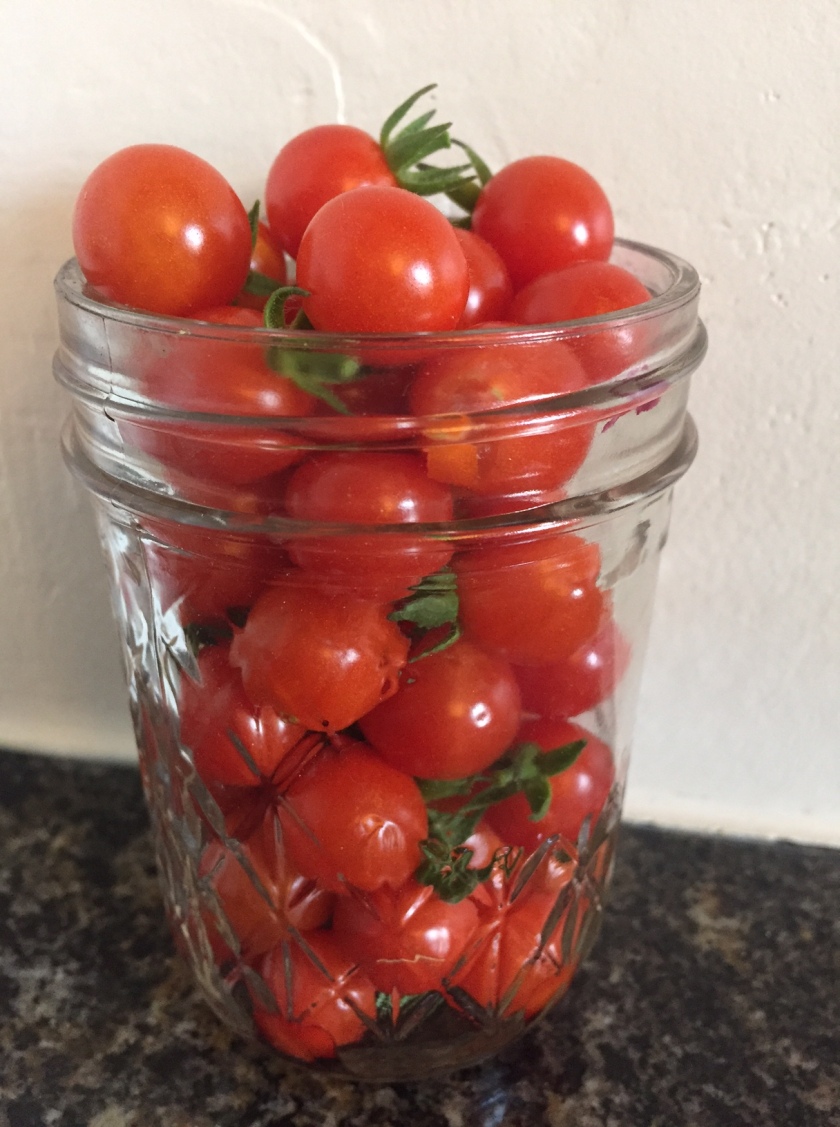 Zucchini cake is popular right now. I made one with yellow squash that was bright yellow and moist, a huge hit with my friends who came over on Labor Day. On EG’s birthday last October I made zucchini and chocolate cakes, and the kids chose zucchini over chocolate, which surprised me. I don’t eat chocolate because it triggers migraines so I usually make some non-chocolate option I can enjoy for dessert. That probably explains my muffin top, which I will not be posting a picture of.

Here’s Pixie licking every last crumb off the picnic table:

It’s a terrible pic but it reveals her true self so well. I accept her for who she is.

*The phrase “Golden load” is from this poem by William Blake, “To Autumn”

O Autumn, laden with fruit, and stained
With the blood of the grape, pass not, but sit
Beneath my shady roof; there thou mayst rest,
And tune thy jolly voice to my fresh pipe,
And all the daughters of the year shall dance!
Sing now the lusty song of fruits and flowers.

“The narrow bud opens her beauties to
The sun, and love runs in her thrilling veins;
Blossoms hang round the brows of Morning, and
Flourish down the bright cheek of modest Eve,
Till clust’ring Summer breaks forth into singing,
And feather’d clouds strew flowers round her head.

“The spirits of the air live on the smells
Of fruit; and Joy, with pinions light, roves round
The gardens, or sits singing in the trees.”
Thus sang the jolly Autumn as he sat;
Then rose, girded himself, and o’er the bleak
Hills fled from our sight; but left his golden load.