Someone gave me 5+ pounds of surplus grapes, which yielded 7 cups of juice. The juice itself was good enough to drink unsweetened but I used it to make jelly and gummies inspired by Ana Rocha. Her recipe uses apple and pear juice with agar powder. Because I thought apple juice would have more natural pectin, I added pectin in addition to agar, but it was not necessary. Agar is a very good substitute for gelatin. It was surprisingly hard to find at my Natural Grocers and other stores in the area though. Employees didn’t even know what it was. 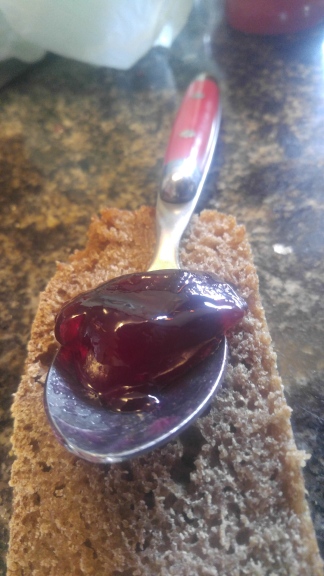 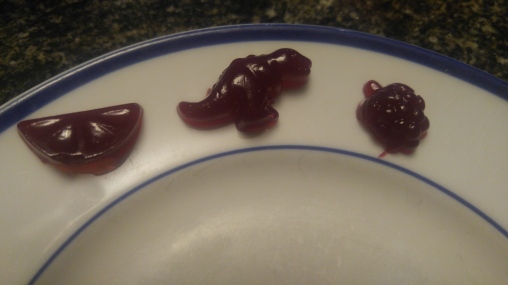 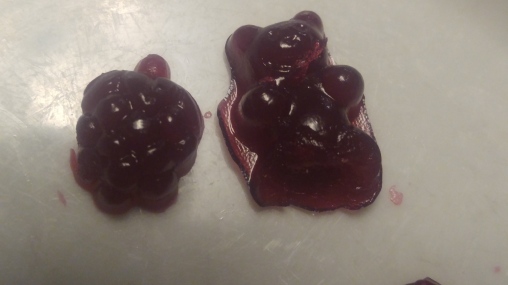 There was a little grape juice left, which I combined with blueberry green tea steeped in pomegranate juice and made blocks of similar gummies to consume during endurance sports. We all ran a 5K open race before a cross-country meet, and this being only my son’s second run at that distance, I thought he might need replenishment. I do sometimes. I’m still tweaking this recipe, but if you want to try it, here’s what I did that day:

I assume this means 6 blocks have the caffeine of one cup of green tea, and my 9 year old had only one block. I ate a single block myself on a morning run when I was feeling weak, and it really picked me up. If it’s a placebo effect that’s OK. My 5K time that day was 3 minutes faster than my goal, but I don’t think that little block of sugar, salt and caffeine knocked 3 minutes off itself. If so, gummies will be banned substances.

That was the best use I’ve ever had for surplus fruit. Let this be a lesson not to throw away any fruit just because it’s more than you can consume fresh. If you don’t want to process it, find a neighbor who will and they’ll probably give you a cut. Next episode, I’ll tell you what we did with 40-some pounds of Gala apples and Bartlett pears from the trees in my front yard. I planted them 10-12 years ago but this is the first time the apple tree produced a lot of fruit.

And here’s another picture of my friend Mantis, because he’s so cool. I hope he’s still out there, alive. 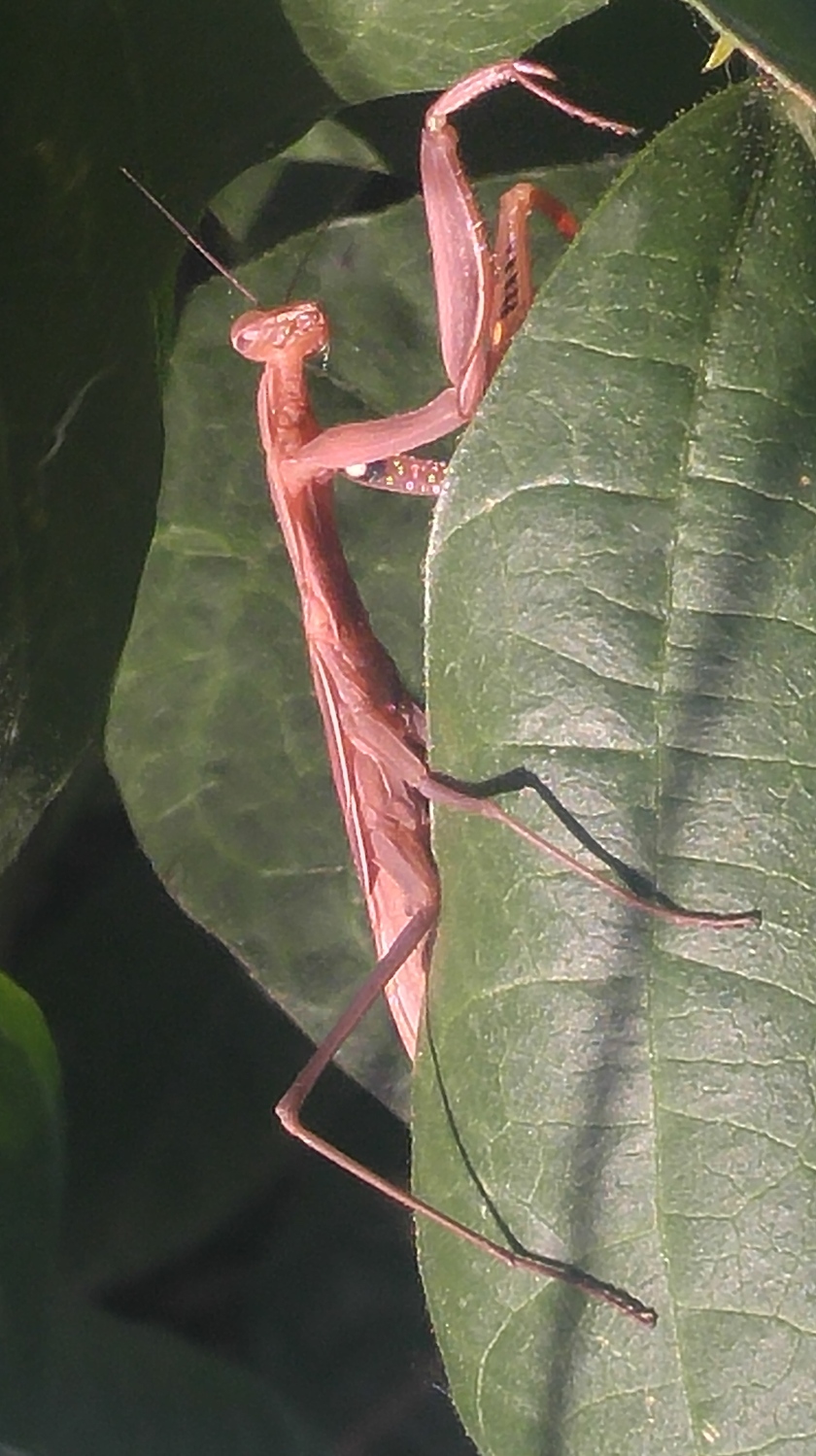 I’m a busy parent. There are kids to play with, horses to ride and this Prosecco isn’t going to drink itself. It’s all I can do to fit in a 2-hour workout.

That’s not really me. I would never wear that. Also I don’t really have that much time on my hands. I don’t even have a string of horses. Just access to a string of horses. And I bought several bottles of Prosecco but it was for our holiday party. There were two left over and I made jelly with one and used half the other in risotto (see this blog for risotto recipes and pics). Don’t remember what happened to the other half.

Making jelly is fun. I wouldn’t normally waste a good bottle of wine on a batch of jelly, but it was Christmas and I sent some to family members. I added lemongrass and basil to the Prosecco jelly and rosemary to some I made with Moscato (EG colored it green). That’s not really relevant to this gardening blog, is it. I didn’t grow the wine, it was just left over from a party. But I did make jelly from the raspberries that grow in my front yard, and that got good reviews. I also happened to score a cheap case of blackberries in the fall and made insanely good preserves out of those, which was almost too pretty to eat. 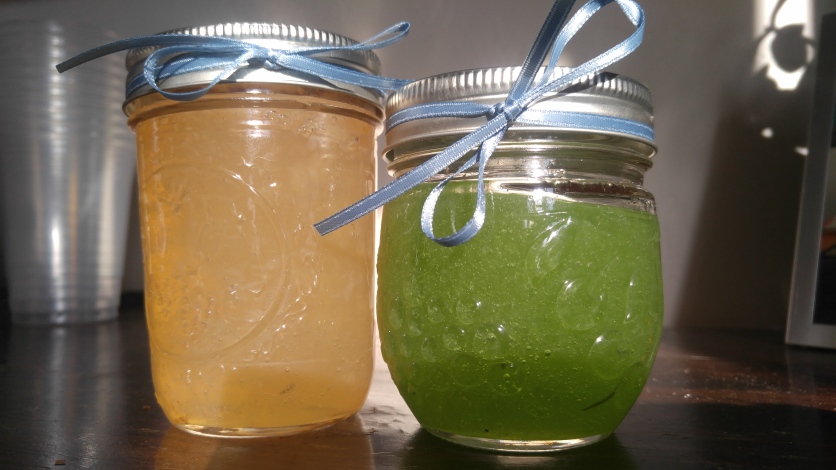 My friend Mean Charlene (ironic nickname) grows a variety of hot peppers, which she shared with me. I combined them with heirloom tomatoes, cilantro, lime juice, salt and pepper for a decent salsa. 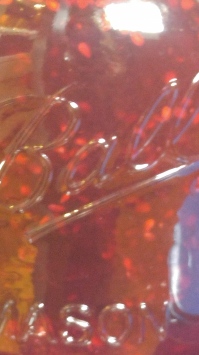 I would grow peppers, but as long as Mean Charlene does every year, I can just trade with her. I did have two plants outside this year, one I planted and another that was a surplus seedling a coworker gave me. Right before the first frost, I made a last minute decision to dig those up and bring them in. They blossomed in November and have little peppers on them. 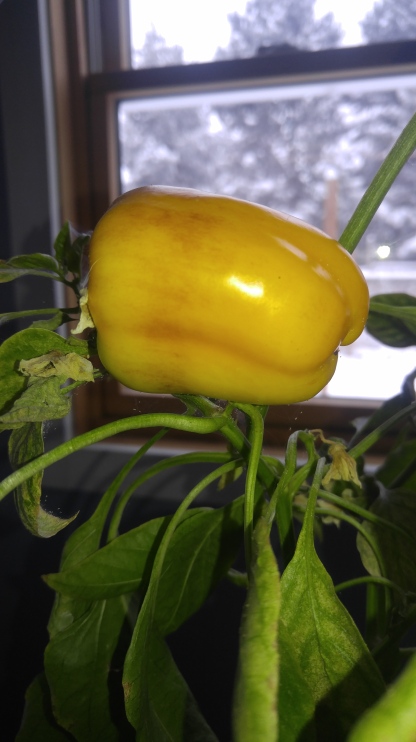 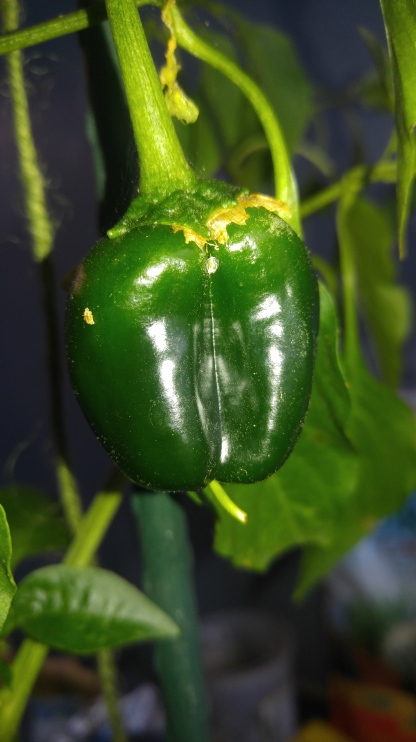 And here’s a blurry pic of the owl in my neighborhood, who has little to do with gardening but I was just so excited I got this close and s/he let me take pics, I’m posting one. 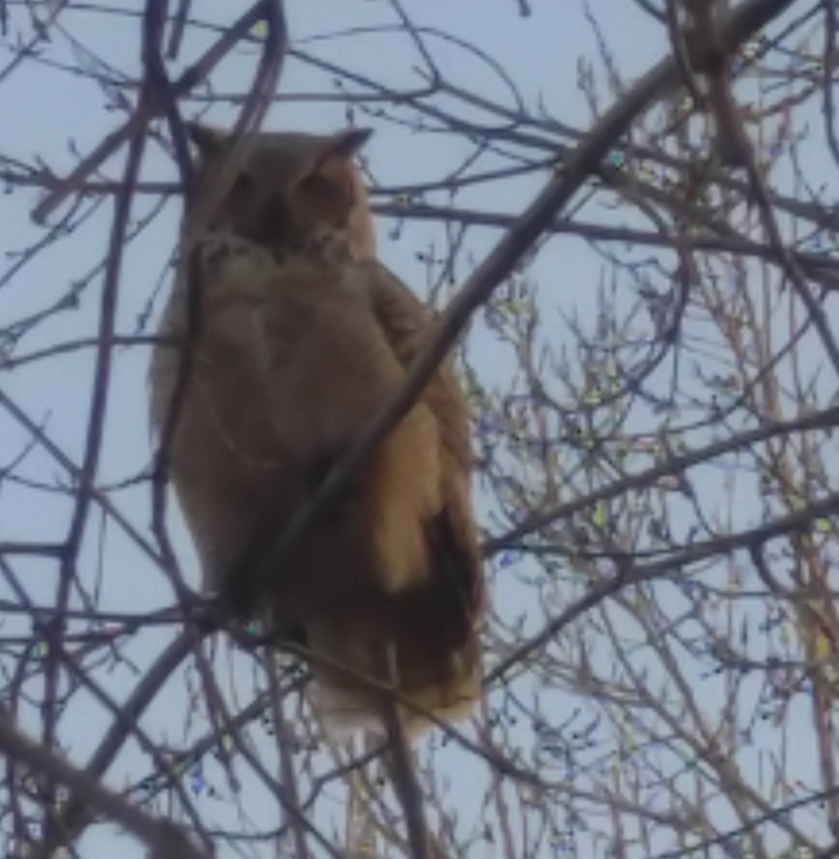