I rotate my “crops,” alternating legumes (which fix nitrogen in soil) with other plants like tomatoes, peppers and squash (which suck it out). But that alone is not enough to replace nutrients used up in a season. My garden is a fenced collection of 4×4 or 4×8 boxes of untreated wood that look like square foot gardens (SFG) but are not exactly. It’s fenced because these adorable dogs love to eat vegetables, particularly green beans:

There’s a lot to be said for SFGs but they are basically container gardens, requiring a yearly investment in growing medium. My soil, if you want to call it that, blows. So I require seasonal infusions of soil amendments and nutrients, as well as some growing medium, but I think it’s inefficient to start with a fresh new load of dirt every year. Even if I weren’t such a tightwad, Metal Pig would see the expense on my spreadsheet and estimate the cucumbers’ worth at about $5 each.

But the headline says I’m suspicious of organic fert and compost, which is true. The first thing I think of when I see labels like “organic” or “all natural” is slaughterhouse waste. You might argue it’s a good use of waste, and I don’t really want to focus on that subject, but I’d rather avoid growing with animal parts if I can. There is a mushroom farm I can drive to and get a trailer load of compost that consists only of mushroom fragments and the wood shavings they’re grown in, and it’s been great for mixing with vermiculite and the existing crappy soil as a growing medium. I’ve also sucked it up and gotten city compost, which is made from stuff my fellow townspeople discard and I’m pretty sure that includes bones from chicken wings and other body parts, but it’s heavy on the nitrogen. I probably won’t do it again but I support the city’s composting program. Throughout the season I’ve added alfalfa meal, cottonseed meal, something called Texas green sand and compost tea. It’s been tempting to just use something made in a lab like Miracle Grow though.

The beans pictured below are being allowed to mature for drying; they might be the speckled ones pictured (Greasy Grits, from Baker Seed Co.): 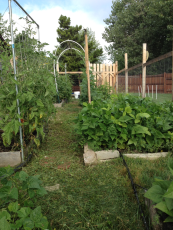 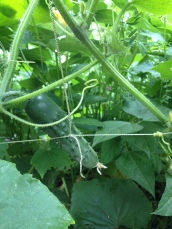