Like a crazy person, I pruned some seedlings already. Unlike the other crap I do just to see what would happen, this has a low risk of concussion or dental bills. I do have shoulder impingement but I think it’s from something else, not pinching tomato leaves. Also I was sober (and TBH I typically am despite my declarations of “HMPaWT!” when doing something to see what would happen). It does make me nervous because I feel like I’m injuring my planties.

I planted nightshades in early February but some took weeks to germinate. I got nervous by March and put a heating pad under a metal baking sheet, and the little pods stuffed with seeds on that. It helped; I got a few more sprouts that way.

Last fall I was an idiot and labeled some of the promising seeds I collected as “P.R.” This could mean either Paul Robeson or Pantano Romanesco. You can’t really go wrong with either but I wish I were less of a dumbass.

Right now, what I have with true leaves are:

Lucid Gem: 6 little planties; planted later but look promising. I will be reluctant to share these.

Striped (aka Speckled) Romans: 3 little ones with leaves, 2 sprouts…I’m going to need more of these. Hope the other seed sprout soon.

Anything else is a potential plant; either a little sprout or still a seed: 4 striped cherry tomatoes of some kind (heirloom like all my plants, but I bought the seeds and don’t know much about them); 12 peppers, a few Red Brandywines, one true Pantano Romanesco and more of the above mentioned tomatoes.

I’m not sure how I feel about pruning. The biggest of the P.R.s I just pinched off the little stem between leaves 4 and 5, and felt bad about it so I put the amputated parts in water. I know it’s easy to get tomatoes to root that way. I wonder how much of that cloning I can get away with. Like can I double my count of productive plants by cloning branches when they’re a little older? 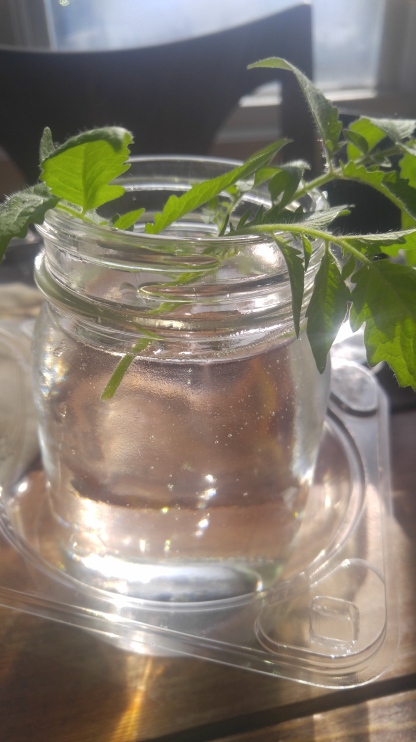 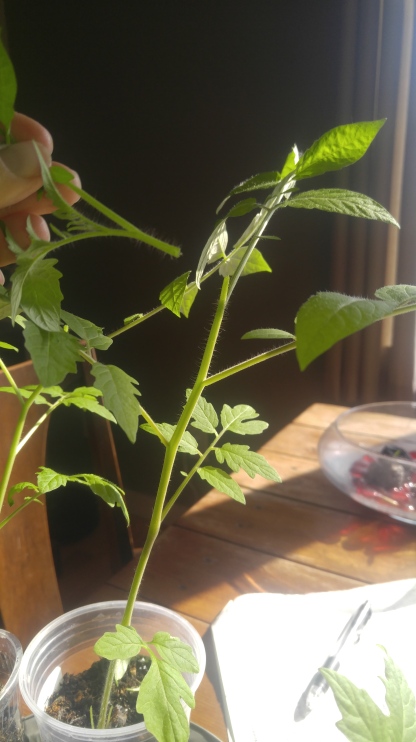 I mixed quinoa and lettuce seeds with potting soil and water, thinking it less fiddly then planting individual seeds. Something is growing; I think lettuce. If I could really grow quinoa I’d save us like a whopping $7/week. Because the dogs and I have a diet based on quinoa.

I should have more done by now. I should be digging up more space to plant. But it’s almost time for whatever that other stuff I was going to do today, after which it will probably be time to crack open a Prosecco.